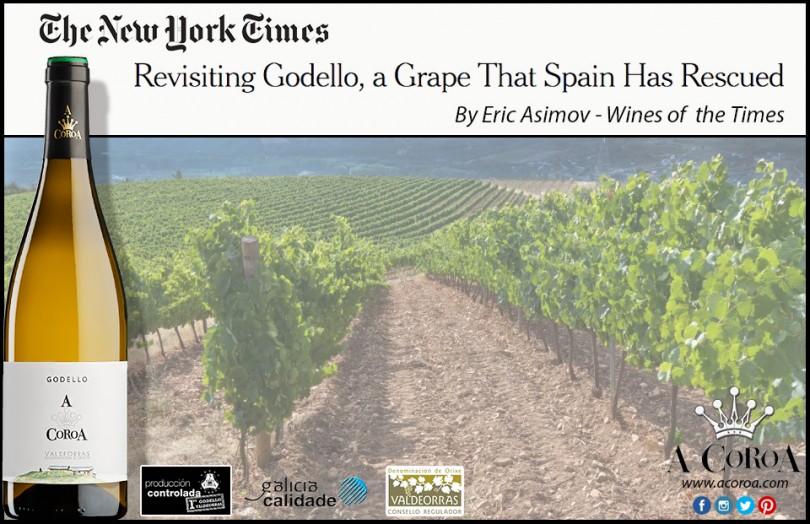 The New York Times highlights again the godello A Coroa among the best in the United States.

Eric Asimov, wine critic of The New York Times, restarted the path begun in 2012 when he selected A Coroa as the best godello marketed in USA and published, one week ago, a new analysis about the wines of this variety and of a cost less than $25/bottle distributed in the United States.

As explained in the article, the intend of a tasting led by three great figures of the American wine industry, was to check the evolution of the wines of this variety within the US market, and being able this time to taste more samples and different variants in the production of the wine than those of 2012. In addition to this, a great emphasis was shown in the production of godellos on lees, with various elaborations of this type included in the analysis.

The A Coroa Godello 2013 was selected for the tasting and got a remarkable rating. Our wine was valued along with other godellos of Valdeorras and more wines of this variety of the nearby apellations of origin of Monterrei, Ribeira Sacra and Bierzo.

Although there was no uniformity regarding the vintage -most of the wines were produced in  2014- neither regarding the types of production -some wines made on lees were included-, the wine A Coroa Godello 2013 was highlighted literally as “lively and focused, with aromas and flavors of honeysuckle, minerals and peach.”

From Adega A Coroa we value in a very positive manner this inclusion in the ranking of the best godellos in the United States, since it is one of the markets in which our wines are settled for some years now. In addition, we want to remark that our production of the vintage 2013 is the one that has been notoriously valued, a fact that confirms the great evolution of our wines in the bottle.

Adega A Coroa, in partnership with Renfe, Turgalicia and Inorde, proposes you to know the Ribeira Sacra and the Valdeorras territories in a very affordable manner14 June, 2016

A Coroa Presents its Wines in the United States1 March, 2020

THE GREAT QUALITY OF THE GRAPE DETERMINES THE 2019 HARVEST IN ADEGA A COROA11 September, 2019

By continuing to use the site, you agree to the use of cookies.